Airwars Investigation: Claims by Key Allies of No Civilian Harm in War Against ISIS Exposed

“We end up with obfuscation, secrecy and – as these revelations show – a kind of internal structural self-denial, where it has become seemingly impossible for the MoD even to accept that civilian casualties have occurred.”

A major international investigation has found compelling evidence that several of the US’s key European allies in the war against so-called Islamic State routinely deny civilian harm from their own actions – even where specialist US military personnel within the international Coalition have assessed such cases to be credible.

Three European countries are implicated – the United Kingdom, France and Belgium – a lengthy investigation by the BBC, Libération, De Morgen and RTL Netherlands has found.

A total of eleven specific civilian harm events have so far been identified – involving the officially confirmed deaths of at least 40 Iraqi and Syrian civilians during 2017 and 2018. No European ally will admit to the fatalities.

“Cases like this expose a fundamental gap in accountability created by multinational coalitions,” notes Dan Mahanty of the US advocacy organisation CIVIC. “If warring parties simply collude to hide their actions, they can also evade their responsibilities. For civilians who lost loved ones or had their livelihoods destroyed, it means losing any hope of remedy, or even basic acknowledgement of their loss. It’s a pretty significant affront to their dignity.”

The problem incidents came to light after the US Defense Department was legally required to report to Congress in May 2019, on all recent confirmed civilian deaths from US military actions. That Pentagon report declared 170 incidents for Iraq and Syria during 2017; and a further 13 events during 2018.

However, when Airwars then crossmatched the 183 declared US civilian harm events against those cases the anti-ISIS Coalition had officially conceded during the same period, it identified 14 further incidents which had been omitted. Several senior US defense officials independently confirmed to Airwars that all credible non-US civilian harm events had been explicitly excluded from the list given by DoD to Congress.

Three of these ‘missing’ events were previously confirmed Australian civilian harm cases. That left eleven civilian harm incidents which had not publicly been admitted by any US ally – for example the deaths of three civilians on May 28th 2017 including Hayat, the wife of Mustafa al-Saguri, who died alongside her young daughter and a third unknown civilian at al Hammam in Raqqa province.

The US-led Coalition had admitted those deaths in April 2019, noting that “Regrettably, the strike on an associated target building unintentionally resulted in the deaths of three civilians.” But which US ally was responsible?

During 2017 and 2018, five partners were still active alongside the US in the war against ISIS: the UK, France, the Netherlands, Belgium and Australia. With the al Hammam incident not included in the Pentagon’s report of US-caused civilian harm events to Congress, Airwars then crossmatched this and ten other unclaimed incidents, against published strike reports by the US’s allies for the dates in question.

In June 2019, Airwars wrote to each nation’s military, requesting confirmation of whether its forces had been responsible or not for specific confirmed civilian harm events.

Australia quickly responded that it had not conducted either of the incidents it had potentially been flagged in, noting definitively that “Australian aircraft did not conduct either of the strikes on 9 January 2017 and 15 May 2017.” Nine months later, the Dutch ministry of defence finally confirmed that it was not responsible for those deadly strikes it had in theory been linked to.

With indirect confirmation that the eleven officially confirmed civilian harm events had been the responsibility of three European militaries, Airwars then approached major news organisations with which it had engaged previously on civilian harm issues. The BBC, Libération, RTL Netherlands and De Morgen each then pursued its own national investigation, with an agreed joint embargo. 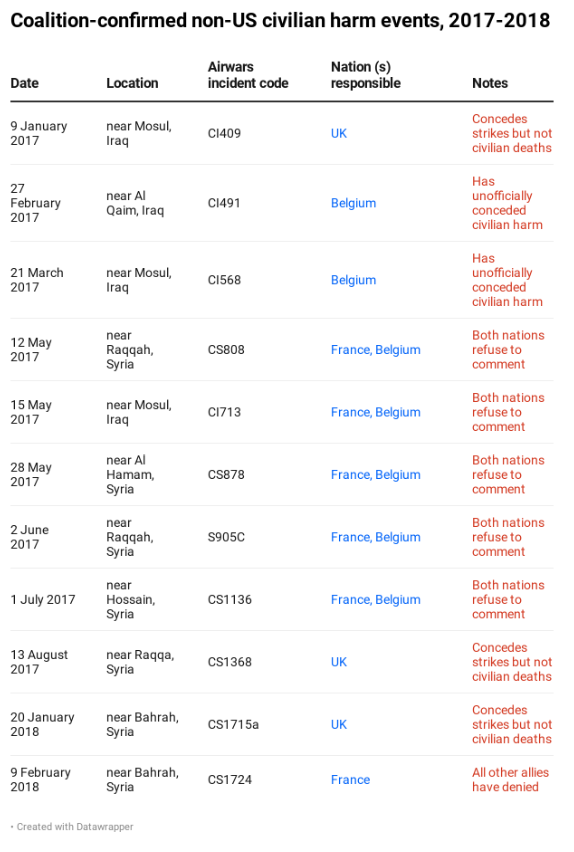 The most comprehensive admission during the investigation came from the UK’s Ministry of Defence (MoD), which is among the more transparent members of the US-led Coalition.

Of the six potential UK events flagged to it by Airwars, the MoD confirmed by letter that it had been responsible for three of the strikes which the Coalition assessed had killed at least 15 civilians. However, the UK then refuted the US-led Coalition’s findings, insisting that no civilians had in fact died.

The first event took place at Mosul, Iraq on January 9th 2017, and had already sparked a BBC investigation after a military whistleblower within the Coalition had reported civilian deaths from an RAF strike. The Ministry of Defence had over-ruled that view, determining that no civilians had been harmed.

Following the BBC’s investigation, US military personnel at the Coalition had themselves then assessed the event – determining it to be Credible in March 2018 and noting that “two civilians were unintentionally killed.” In a detailed letter to Airwars, the MoD justified its own continuing refusal to accept civilian deaths:

We looked at this incident very closely indeed. It happened in an area of active fighting between Daesh and the Iraqi security forces, and neither the troops on the ground nor the coalition aircraft detected any signs of a civilian presence in the area either before or after the truck-bomb was destroyed. The group of men, by their movements and behaviour, showed every sign of being Daesh fighters – particularly the presence of a motorcyclist, frequently used by the terrorists to scout ahead during the street fighting…. We therefore concluded that, if the group did indeed sustain casualties, they were extremely likely to have been Daesh terrorists; we have no reason to believe, on the evidence available, that they were civilians.

The second RAF strike took place at Raqqa, Syria on August 13th 2017. According to the US-led Coalition, 12 civilians died after “Coalition aircraft engaged ISIS fighters utilizing a mortar system in a building used as a defensive fighting position.” Among the victims locally named that day were Walid Awad Al Qus and his young daughter Limar.

The Coalition’s admission of 12 deaths in this event represented one of the highest confirmed tallies for the entire battle of Raqqa, which an Amnesty International/ Airwars investigation later concluded had seen at least 1,600 civilians killed by Coalition actions.

Once again accepting the strike but denying the civilian deaths, the MoD asserted: “A single individual was seen on weapons system video moving in the area just prior to the impact of one of our weapons. There is no evidence that this individual was a civilian, as opposed to one of the Daesh fighters engaged with the [SDF]. We have certainly not seen any evidence that twelve civilian casualties were caused.”

In the final event, an RAF drone strike on January 20th 2018 killed one civilian nearby, according to an internal assessment by the US-led Coalition. Once again, the British reached a different conclusion. “Careful analysis was conducted of the available footage and of all available reports from the area. These showed that there was no evidence of civilians being present in the location, and the footage identified a weapon being carried by the likely casualty. It was therefore concluded that said individual was very likely a Daesh extremist and not a civilian.”

Senior defence officials confirmed to both the BBC and to Airwars that the UK presently requires what it calls ‘hard facts’ when assessing civilian harm claims – an apparently higher standard even than the ‘beyond reasonable doubt’ used by UK courts. Civilian casualty assessors within the US military instead use a ‘balance of probabilities’ approach, Airwars understands – allowing them to consider local credible reports of civilian harm in their own investigations.

In effect, the UK has set the burden of proof so high that it is almost impossible for the MoD to reach a determination of civilian casualties – even when its most powerful ally the US concludes the exact opposite, critics say.

Chris Cole of the advocacy group Drone Wars UK accused the Ministry of Defence of overly focusing on managing public perceptions of war, rather than looking at appropriate levels of transparency: “We end up with obfuscation, secrecy and – as these revelations show – a kind of internal structural self-denial, where it has become seemingly impossible for the MoD even to accept that civilian casualties have occurred.”